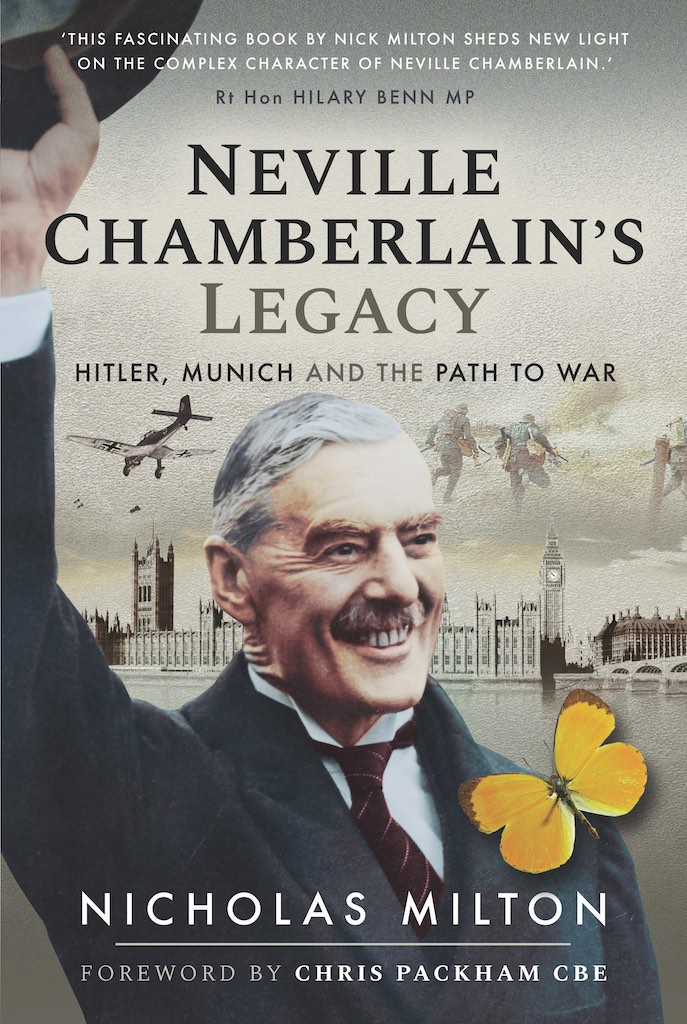 Prime Minister Neville Chamberlain is still best remembered for appeasing Adolf Hitler and waving his ‘piece of paper’ at Heston aerodrome. Sacrificing the Sudetenland at Munich on 30 September 1938, he then memorably declared ‘peace for our time’. Yet just a year later Chamberlain was forced to declare war on Germany for the second time in just over twenty years.

History has judged his policy of appeasement as being the catalyst for the bloodiest conflict in human history. So nearly 80 years after his death Chamberlain remains the most vilified politician of our time. But there is much more to Chamberlain’s legacy that Hitler, Munich and the path to war.

This is his story, told in his own words

Nicholas Milton is a natural and military historian.
Nick writes about wildlife and the Second World War .‘Neville Chamberlain’s Legacy - Hitler, Munich and the path to war’ is his first book.

We as designers, when asked to design something new, have a temptation to try and reinvent the wheel. Because doing something like everyone else seems somehow wrong. We have been hired to do something different. Not to mention that the industry rarely offers awards and praises for designing something that has “the best use of conventions”.

“Look deep into nature, and then you will understand everything better.” Albert Einstein

From an early age Neville Chamberlain was fascinated by natural history. At the age of 11 he identified all the moths he found in the garden of his home Highbury Hall, followed by all the birds. In his 20's he lived on the Bahamas growing sisal and while there discovered a new species of butterfly, the Chamberlain’s Yellow. As an aspiring politician Chamberlain helped to found the Campaign to Protect Rural England and The Wildlife Trusts. When he entered Downing Street in 1937, first as Chancellor then as Prime Minister, he took a walk nearly every day in nearby St. James’s Park. After writing an article in The Countryman magazine about the wildlife of Downing Street, Chamberlain was approached by a fellow birder called Gilbert Collett who lived nearby. Collett began a remarkable correspondence with Chamberlain about their love of birds, letters which continued right up until Chamberlain’s death in 1940. As war loomed birdwatching became more than just a hobby, it became Chamberlains way of coping with the nightmare that was Adolf Hitler. This is their remarkable story.

“Blessed are the peacemakers, for they will be called children of God.” Matthew 5:9

Neville was born in 1869, the first son of Joseph Chamberlain and his second wife, Florence Kenrick. Tragically Florence died in childbirth in 1875 leaving Neville with three sisters, a half sister and a half brother, Austin. Growing up without a mother and with an austere father who was away all the time, Neville became very close to his three sisters. From an early age to keep in touch they started writing letters to each other. Unlike his half brother Austin who was always destined to go into politics, Neville's role in life was to run the family businesses. But after meeting his wife Annie he threw his hat into the political ring and at nearly 50 years old he finally became an MP.  Throughout his political life Neville Chamberlain put down on paper his innermost thoughts in a weekly letter to his two younger sisters, Hilda and Ida. The letters are a unique account of what he was really thinking in the run up to the Second World War. They reveal, in Chamberlain's own words, the extraordinary lengths he would go to in his efforts to prevent another world war.

“Out of this nettle, danger, we pluck this flower, safety." Neville Chamberlain

Chamberlain first came to prominence as Lord Mayor of Birmingham during the First World War creating an air raid protection system, opening a municipal savings bank and promoted national service. As Minister of Health during the 1920’s he built social housing, introduced widows pension’s and championed a midwifery service. After becoming Prime Minister in 1937 his time soon became dominated by the ever more menacing threat from Nazi Germany. To prevent another war in 1938 he took three dramatic flights to see Hitler from Heston aerodrome which culminated in his ‘piece of paper’ declaring ’peace for our time’. When he was finally forced to declare war on Germany on 3 September 1939 following their invasion of Poland, Chamberlain was desolate. This is a story of how he used those experiences to help to create his other war legacy - the Women’s Land Army, the Air Raid Precautions organisation and the Special Operations Executive

Nicholas Milton is a natural and military historian. He writes about wildlife and the Second World War. 'Neville Chamberlain’s Legacy - Hitler, Munich and the path to war’ is his first book

Please feel free to contact me using the contact from. I will endeavour to return your emails as soon as possible.

Thank you! Your submission has been received!
Oops! Something went wrong while submitting the form.